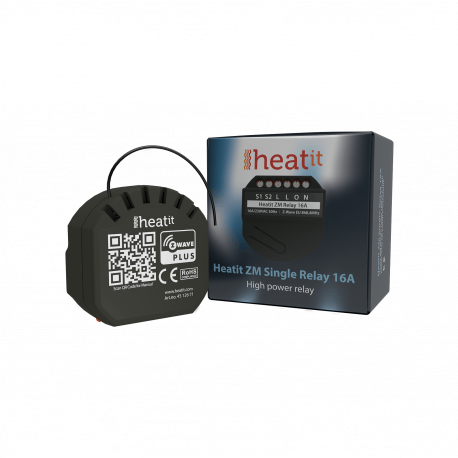 Heatit ZM Single Relay is a high power relay for in-wall installations. The relay allows you to control connected devices either through your Z-Wave network or via a wired switch. The module is equipped with a 16A relay and has a scene controller functionality.

The Heatit ZM Single Relay has a power metering feature that allows you to monitor the power consumption of your connected devices.

Heatit ZM Single Relay has SmartStart. This feature allows the user to include all devices with SmartStart by scanning the QR codes on the devices. On startup all the devices will automatically be included in the gateway (requires SmartStart compatible primary controller).

2. On the Quick Guide manual.

There are two ways to add the Heatit ZM Single Relay 16A to a Z-Wave network.

Add mode is indicated on the device by a blinking green LED. This lasts until timeout occurs after 90 seconds, or until the module has been added to the network.

The LED will light up for 3 seconds if adding is successful.

Remove mode is indicated on the device by a blinking green LED. This lasts until timeout occurs after 90 seconds, or until the module has been removed from the network.

NB! Please use this procedure only when the primary controller/ gateway is missing or otherwise inoperable.
Other Special Features
Paragraph 10.1 - Overload