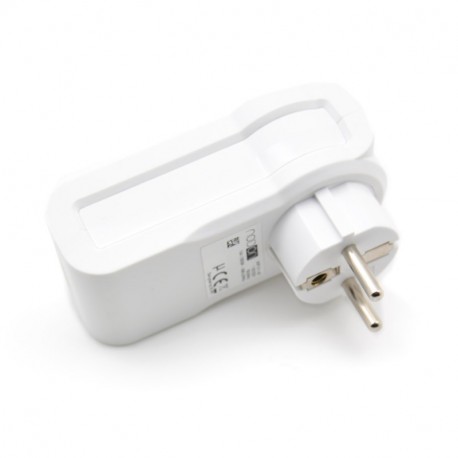 The NODON Z-Wave Plus smart plug allows you to control the load that you have connected to it from a distance through Z-Wave wireless technology (lamps, appliances ...). This plug has the functionality that detects and transmits the loss of current: it warns when the light goes out.

The NODON Z-Wave Plus plug can be controlled directly through other Z-Wave devices such as the Octan Remote NodOn® wall switch or through a Z-Wave home automation controller.

A button allows us to turn the plug socket on or off directly.

This Z-Wave plug allows us to detect current failures: it warns when the light goes out. It stores a small amount of energy enough to send a signal to your Z-Wave home automation controller, which will perform the programmed actions.

It does not have consumption measurement, but we consider it smart plug because it detects power cut and communicates it. It is a very indicated device to notify power cuts to avoid incidents and losses in the domestic, commercial and industrial scope, such as:

- The grass, plants and flowers of the garden could dry out due to lack of irrigation

- The refrigeration and air conditioning systems of small server rooms would stop working and could cause serious problems in the computer systems.

- Control systems, home automation and inmotica are out of service due to lack of power supply

10 other products in the same category: