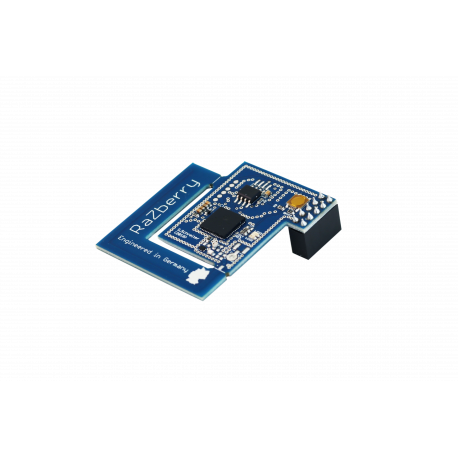 RaZberry 2 Card - Z-Wave Plus GPIO Adapter for RaspberryPi from Z-Wave.ME

The daughter card hosts a Sigma Designs ZM5101 Z-Wave transceiver module (a so called 5th generation Z-Wave module), an external 32 K SPI flash for network data and a PCBA antenna. Additionally two LEDs are used to indicate certain status of the Z-Wave controller chip. Beside the PCBA antenna there is an option to solder a U.FL connector for external SMA antenna.

The power consumption of the board is typically 18 mA at 3.3 V but can peak up to 40 mA when the chip is transmitting.

But if the Z-Way configuration interface included in the device does not satisfy us or we do not know or want to program our own application we can always use free software developed by third parties such as those listed below:

At the same time there are apps for your smartphone or tablet of which we highlight:

The system is based on the Z-Wave Plus chip from Sigma Designs and has a built-in antenna directly on the PCB board. Two LEDs (red and green) are used to communicate information to the user such as data transmission or the inclusion / exclusion status of the controller in the Z-Wave network.

Compatible with virtually all Raspberry models, even old ones, as well as including Model B + and "Raspi" 2 and 3

6 other products in the same category: