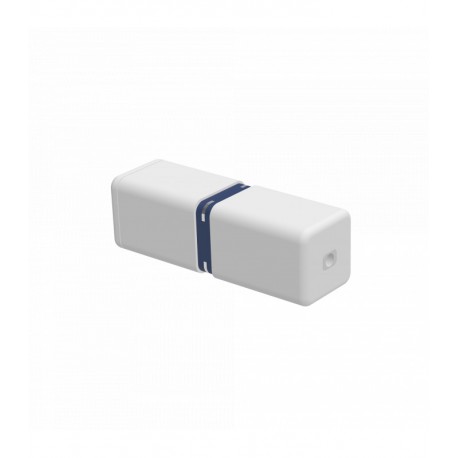 The Aqua-Scope Flood Sensor was designed for the sole purpose of detecting water. Z-Wave Plus v.2 wireless technology (700 Series) needs a Z-Wave controller to work.

The water sensor even detects water droplets
Replaceable battery, battery lasts at least 7 years
Built-in freeze sensor
IP67 waterproof design
An additional external sensor pad can be attached
Works in any position thanks to 4-pin sensor ring
The water sensor is placed in critical positions inside the home and will detect even the smallest drops of water thanks to the capillary effect (the water soaks into the channel of the color sensor). Detected water triggers an alarm sent to a central gateway using the Z-Wave or LoRaWAN wireless protocol.

The unique feature of this device is the central sensor ring with 4 metal water probes in the four corners. This ensures that the detection works in any orientation of the device placement.

A second external water detection probe can be connected to the main device and will act as a second sensor other than the main probe. The internal temperature sensor will report the freezing condition to protect the water installation from further damage.

l Flood Sensor can send wireless control commands directly to motor servos such as Ball Valve Servo (BVS) or Gate Valve Servo (GVS) communicate with Aqua-Scope Controller or other System Controllers Smart Households. The Z-Wave version implements the latest Z-Wave Plus V2 protocol. The Lora version supports both the Class B / C standardized LoraWAN and a proprietary extension to communicate locally with battery-operated actuators such as motor servos.

5 other products in the same category: