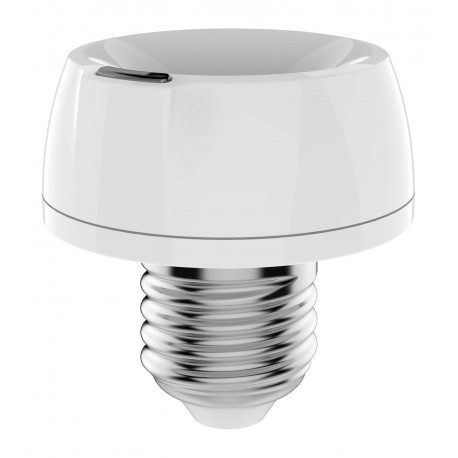 Dimmer or attenuator or regulator in conventional cap shape with Z-Wave Plus technology to easily dim light bulbs in your home or office.

Easily adapt to any standard E27 lamp socket with the Philio Z-Wave smart dimmer socket to turn lighting on and off or adjust lighting levels with your mobile device or computer with any Z-Wave certified entry. It can be controlled in multiple lighting groups or it can be used to create adjustable ambient interior lighting scenes.

1. Pressing Include button of PAD02 three times within 2 seconds will enter inclusion mode.

2. Within 1 second, press Include button of PAD02 again for 5 seconds.

3. IDs are excluded.
Inclusion
1. Put your Z-Wave controller into inclusion mode by following the instructions provided by the controller manufacturer.

2. Pressing Include button of PAD02 three times within 2 seconds will enter inclusion mode.
Exclusion
1. Put your Z-Wave controller into exclusion mode by following the instructions provided by the controller manufacturer.

2. Pressing Include button of PAD02 three times within 2 seconds will enter exclusion mode.

3. Node ID has been excluded.
Firmware Updatable
Indicates whether the firmware can be updated and whether it is done by the consumer or a technician.
Switch Load Capacity Watts
The amount of switch load energy the product is rated for in Watts
Neutral Wire Required
For electric in-wall/wired switches, indicate whether a neutral wire is required for installation.
Z-Wave Scene Type
Indicates which of the two types of Z-Wave scene command classes are supported. Scenes or Central Scene
Color
If the product is only available in one color, pick the color from the list.

5 other products in the same category: