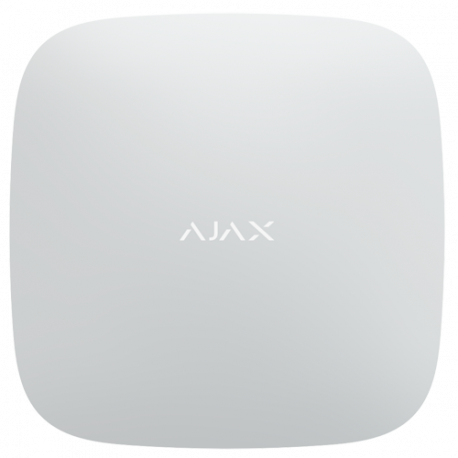 Increases the reach of all devices in the Ajax security system.

ReX is an Ajax security signal repeater that expands the boundaries of a protected area. It controls the devices in the system whose connection it receives and allows the user to place them at a considerable distance from the hub: in multi-story offices, a detached garage or a large production plant. With ReX, the communication range is doubled and the coverage area of the Ajax radio network reaches 16 km².

Extends the radio coverage area up to 16 km²
Alarms are transmitted in 0.3 seconds
Connects to the system in 2 minutes

Increase the flexibility of the AJAX ecosystem

ReX acts as a reliable link between the hub and the Ajax devices. Depending on the requirements, all the detectors or only some of them can work through the smart repeater. Meanwhile, the number of devices connected to ReX does not affect the speed of sending alarms.

While common repeaters represent the weakest link in security systems, increasing the risk of losing the alarm signal during transmission, ReX takes Ajax reliability and robustness to a new level. After the hub, ReX is the second decision center. It integrates the detectors into an autonomous group within the system. If the connection to the hub is interrupted for any reason, ReX will take over: it will receive an alarm signal from the detector and activate the siren to draw attention to the incident and scare away the thief.

As smart as a hub

ReX uses the intelligent OS Malevich operating system. This operating system has already proven its reliability: it is used in Ajax hubs to ensure the security of hundreds of thousands of installations around the world. ReX knows the same as the central Ajax dashboard, controls the devices connected to the system, makes decisions with lightning speed and is always alert. ReX's functionality and role in the security system will continue to increase with OS Malevich updates, which are free for all users.

ReX is protected against software and hardware attacks. The OS Malevich operating system running ReX is not vulnerable to viruses or attacks, preventing interruptions caused by attacks on firmware code. It is not possible to hack ReX by interception of the signal: the information that the device receives and sends is encrypted. A sudden interruption of the power supply will not be a problem: ReX has a powerful battery that will not jeopardize the safety of the premises.

To connect ReX to the system, scan the QR code, name the device and turn it on. Next, you just have to select the Ajax devices that will work through the repeater. To install the device, it is not necessary to disassemble ReX: the repeater can be installed on the SmartBracket with a simple procedure.

23 other products in the same category: