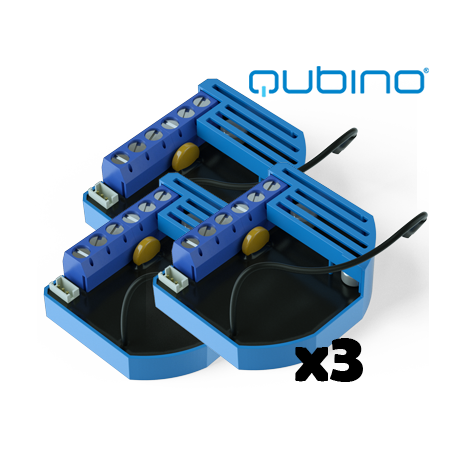 Qubino Flush Dimmer 3 x micromodule regulator pack for regular and on / off devices, with Z-Wave Plus technology. This Z-Wave micromodule is a relay used to regulate ("dim"), turn on or off (On / Off) electrical devices such as lights, fan speed, etc ...

The micromodule can be controlled either through a Z-Wave network or through a wall switch. This module has been designed to be mounted inside a mechanism box and hidden behind a conventional wall switch.

We highlight as an advantage with respect to other regulators, that the Qubino Flush Dimmer micromodule is able to control the electrical consumption of the connected load (lighting, fan ...). It also has a connector to which you can connect a temperature probe (optional, not included) to provide greater versatility to this module, which apart from the lighting control, offers control of electricity consumption and temperature information of the stay in the one that has been installed.

Demonstration video of the easy installation of Qubino Flush Dimmer

The first Z-Wave controller micromodule in the world with MOSFET technology that also supports:

Independent tests guarantee its safety in terms of temperature increase, manufacturing requirements, resistance of insulating materials, electrical overloads, according to European standard standards EN 60669-2-1. It is the smallest Z-Wave dimmer that exists in the world (August 2015). The design of its encapsulation ensures a very simplified installation in terms of ease of wiring, inside a mechanism box.

Demonstration video of the regulation of LED bulbs and low consumption bulbs (CFL).

TESTED AND TESTEED BY PROFESSIONAL ELECTRICIANS

Qubino dimmers have the following advantages over other similar devices:

Greater compatibility with most controllers (except Fibaro - Jun 2016)

It has as option of a temperature sensor

It has independent power, so that, unlike others, even without a load, it could be operated and installed.

It has 3 switch inputs

It has an improved protection against overloads.

It offers consumption report by percentage, by time interval, etc.

It allows associating up to 16 devices, very useful for dishevelling several lines of dimmable lighting load, which we want to behave in a uniform way as if it were a single line, operated from a single master dimmer.

Distance up to 30 m indoors (depending on building materials)

For installation in boxes Ø e 60mm or 2M

Additional information is available in the technical specifications.

10 other products in the same category: