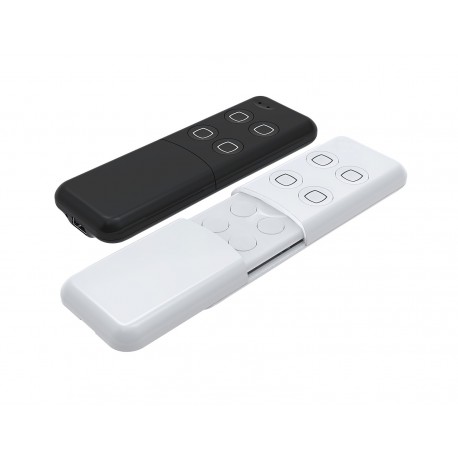 Remote control Mnimote de Aeotec. The use of a remote control is a very easy way to control Z-Wave networks. Designed for use in Z-Wave, or act as universal remote controls, so that other equipment such as audio or video players and receivers can be controlled through infrared using other devices controlled by the domotica.

The Aeotec Minimote remote control can control a variety of Z-Wave compatible devices such as switches, dimmers or blinds. The device can include and exclude devices, group them, and establish and release associations.

Minimote is designed in a clear and simple way, but it has many functions with its four action buttons. Behind a slider, there are four more dedicated buttons for Z-Wave network control (Inclusion, Exclusion, Association, Learning).

The Aeotec Minimote is a small and portable Z-Wave controller ideal for users, who do not want to operate a sophisticated PC control or perform complex scenes of automation.

A non-replaceable but rechargeable battery powers the remote control. The recharge is done on a conventional USB bus using the charging cable supplied.

The Aeotec Minimote is a low cost remote controller focused on the ease of use of the end user.
Although simplicity and user experience are the main focus, the full range of Z-Wave remote controller capabilities remain intact for the advanced user. The installation of the network has been greatly improved through the interface. The Minimote is updatable by the end user so that the latest Z-Wave protocols are always available. An internal lithium battery allows months of use and recharges via USB.

19 other products in the same category: